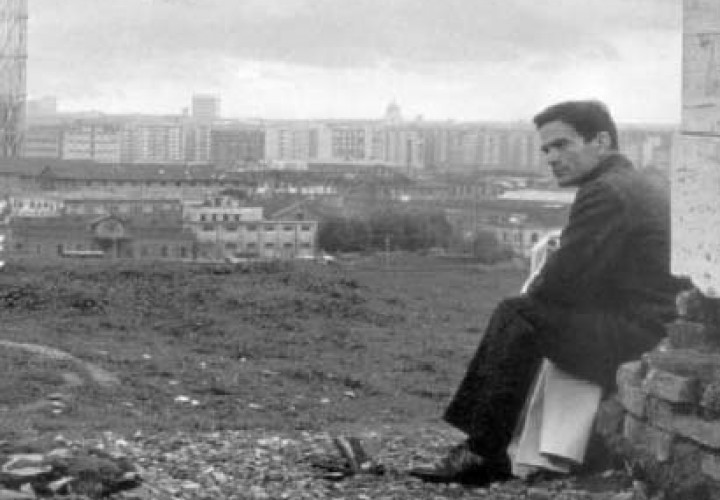 One of the highest intellectual and artistic personalities  of the XXth c.; novelist, poet, linguist, playwright, columnist and filmmaker, Pasolini set his roots in Casarsa, Friuli, the birthplace of his mother Susan and town-refuge during the Second World War, where he founded a small academy of the Friulian language, based on the Provencal example, and where he was buried after his funeral, departing from the beloved church of Santa Croce.
The years spent in Casarsa also marked the beginning of Pasolini’s public commitment, working as a teacher. In fact, in 1944, in the very middle of the War, Pasolini and his mother, who took refuge in an old barn in the village of Versutta to escape the danger of allied bombings, improvised a makeshift school between the hay and farm implements for about twenty children who, because of the dangers, could not get to the schools in the neighbouring towns.
But the fields and streets of this tiny village of Friuli, where the poet often went for long walks or rides, were the scenario of other "adventures" of the young Pasolini. In 1943 it was actually Pasolini, at that time engaged in some experiments in oil painting and ink drawing, who made part of the fourteenth-century Giotto-style frescoes hidden behind the plaster on the walls of the church of Sant’Antonio Abate come to the surface by rubbing some onions on the plaster, as suggested his friend, the painter Rico De Rocco.
From 1947 to 1949 Pasolini taught in the public middle school of Valvasone, a detached section of the middle school of Pordenone.
Pasolini, a lover of art, became fascinated by the story of the gravestone preserved in the Church of Santa Croce, which had been a witness to Vow to the Madonna in 1529 that, recalling the narrow Turkish escape, inspired his drama "I Turcs tal Friul" a fresco without time of the soul and the peasant society, represented for the first time posthumously in 1976.

Works by and about Pier Paolo Pasolini (The link you are accessing might not be in English.)