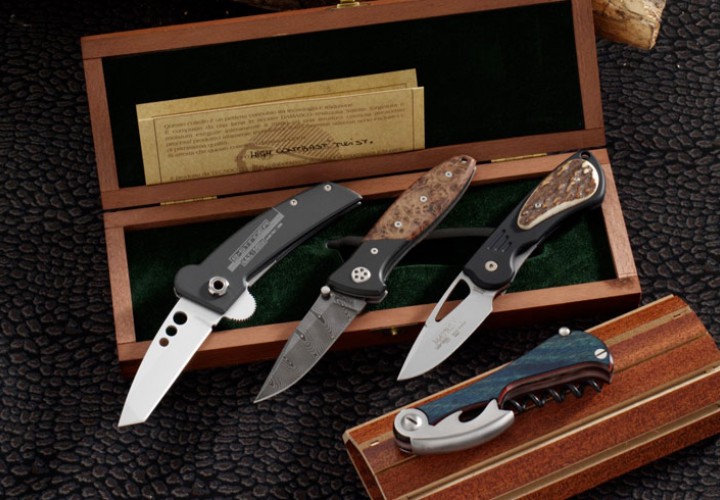 You can date to 1453 the start of the history of the Maniago smithies, when Nicolò di Maniago obtained from the Magistrate of the Venetian Waters permission to channel into an irrigation stream water from the Còlvera torrent. Along this stream and in correspondence with convenient height changes, besides flourmills and sawmills some smithies were also built.

The water of the Còlvera, striking the paddle of a large water wheel, activated a mechanism that provided energy for a donkey hammer, a machine that the favri da gros (heavy blacksmiths) used to strike a piece of iron, already heated, with force, until it reached the required shape. In this way equipment for farmers and woodsmen was made, as well as large knives, swords and other bladed weapons for the troops of the Serenissima Republic of Venice.

Around the 1700s, with the need to produce smaller and more functional cutting implements, the technology of the Maniago smithies and their image was modified: to show oneself to be a fine work blacksmith, a craftsman needed for his work a forge, a grindstone and a workbench. Without the need for a nearby anvil (and water), the workshops of the fine work blacksmithssprang up more or less anywhere in the area. Production was orientated to scissors, pocket knives, table knives and also professional instruments.
At the start of the 1900s the method of working changed again and the first large factories were born where, thanks to the use of machinery activated by electricity, it was possible to produce cutting implements on a production line with less time and effort. The first of these Maniago establishments, CO.RI.CA.MA. (Coltellerie Riunite Caslino Maniago), opened the door to foreign capital, seeing that it was started in 1907 by the German Albert Marx, proprietor of other industries in Solingen and Caslino. The different organisation of the work and the use of new machinery like guillotines, lathes, mills and shapers guaranteed precision work, while great presses and vertical drop hammers allowed cold and hot stamping of the metal.
If at the beginning of the 1800s there were about 130 workers in the 21 workshops in Maniago, it had already grown to more than 500 in forty or so active businesses just a century later. This data alone shows how important were blacksmiths and cutlers for the people of Maniago. The cutlery factories of Maniago were certainly not saved from the crisis that struck the world economy in 1929 as they found themselves in serious difficulty and numerous unemployed chose at that time the route of emigration. On 15th August 1929 some small local manufacturers decided to form a consortium to rationalise purchasing and working systems, but it had a brief life and already in 1931 the first consortium was dissolved.
In 1960 a new Maniago Consortium of Cutlery Manufacturers was formed, whose main purpose is the promotion of the products of Maniago in Italy and abroad, above all on the occasions of international trade fairs specialising in the field of sporting and professional cutlery.
Today Maniago is the seat of a cutlery cluster, made up of 9 local government areas employing about a thousand employs only in the manufacture of cutting implements and qualifies as the second largest industrial centre in Pordenone Province.  Numerically controlled machine tools, laser cutting, absolute precision in temperature control in heat treatment, use of special steels and high-yield materials are only some of the technical innovations that guarantee that the products from the Maniago industry are of superior quality. From multi-purpose pocket knives to professional scissors, from sports daggers to kitchen knives, from spatulas for craftsmen to precise surgical instruments: the products from Maniago cover a major part of the nation’s needs, but exports to European and American markets are strong. Also corkscrews, turbine blades, transmission gears and skate blades for competitions are made by companies in Maniago that are industry leaders worldwide.

Concerning quality, the QM mark represents the Quality Mark of the cutlery cluster of Maniago; it relates to a project born in 2003 from the collaboration between the 9 communities of the cluster, Udine University, the trade associations and  Montagna Leader that has co-ordinated the initiative. QM is intended to underline the quality aspect as a fundamental resource for the recognition and value of the product on the national and international markets.  From these prerequisites, standards and quality requirements have been set that unite the businesses which want to grow in this field and achieve worldwide recognition, exploiting the name and fascination that Made in Italy can exercise.

Text supplied by the Tourist Office of Maniago.