The Dolomites are a word heritage - Pordenone with love
NATURE / Parks

The Dolomites are a word heritage 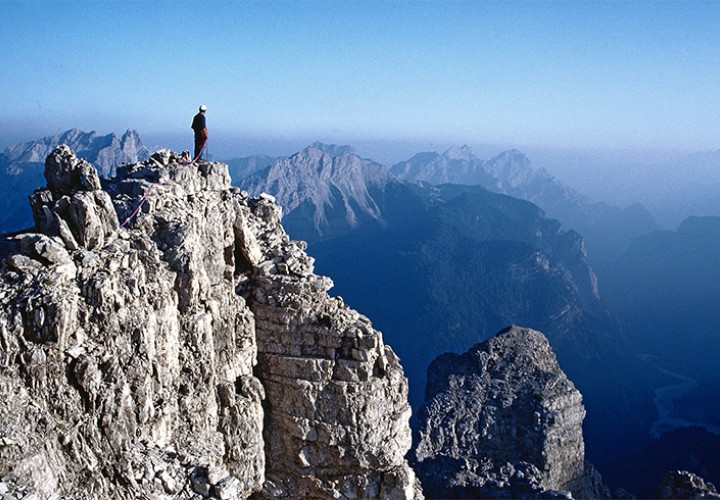 The long-awaited decision finally came: at last, the Dolomites are a UNESCO World Heritage Site.
In reality, the fact that the Dolomites constitute a practically unique case, due to the integrity and exceptional characteristics from a geological and geomorphological point of view, had already been sensed by the great Déodat Gratet de Dolomieu more than two centuries ago, when he identified and analysed the rock that makes these mountains so extraordinary.

Therefore, the decision of UNESCO is late to a certain degree, considering the fact that there were already 43 sites in Italy belonging to the World Heritage List, which makes our country the world leaders in terms of recognised sites. The novelty, if anything, is that the Dolomites are the second site, after Isole Eolie, to be listed as a Natural World Heritage site (because all the other sites belong to the Cultural Heritage).

As soon as the decision was announced, there was controversy over the seat of the "Dolomiti, Dolomiten, Dolomites-Dolomitis UNESCO Foundation”, which will be responsible for coordinating the various bodies to manage the preservation and enhancement of the universal heritage. What came out was the Italian localistic tradition, momentarily left to good "teamwork" by the five provinces involved (Trento, Bolzano, Belluno, Udine and Pordenone), which was crucial to the success of the application.  A dispute also broke out on the opportunity of the prestigious acknowledgement.  In fact, there are those who fear that this is a great piece of marketing, masterfully orchestrated by the local institutions, aimed only at economic growth and not at the protection and sustainable enhancement of the territory.  Undoubtedly, the concept of "enhancement", as important experts believe, is nevertheless ambiguous in itself, because it does not untie the knot of the fine balance between the need for a high level of protection and actions to promote the asset to be enhanced.

There are already those who hold that the recognition of UNESCO could bring a 30% increase in tourism, which would cause an impact that would be difficult to sustain given the fragile environmental balances. It is no coincidence that some of the most important Italian figures of the mountain region like Reinhold Messner, Cesare Maestri and Mauro Corona have warned against the easy enthusiasm and the danger of an unprecedented invasion of tourists, which would ultimately destroy the integrity and exceptional feature that distinguishes the Dolomites.

Moreover, the World Heritage List, "is the legacy of the past that we enjoy today and that we will pass on to future generations," as defined by UNESCO. The latter, as an independent body of the United Nations, grants awards when the conditions are met, but it does not hesitate to withdraw them if those conditions are not met. As has recently happened in Dresden and the Elbe River Valley, which has been excluded from the list for having built a concrete bridge, confirmed by popular referendum to improve links between the two parts of the city,but which, for the UNESCO expert, inevitably affects the appearance of the city and the entire environmental scenario. To be remembered are the controversies that have assailed the public administrators of the Aeolian Islands regarding the upgrade of the tourist infrastructures and port facilities, which could have resulted in cancellation of the site from the World Heritage List.  For the Dolomites, as well as for the Sicilian islands (and Italy as a whole), there couldn’t be a worse fate than being included in the UNESCO "black list" for choices judged as insane at an international level.

As the Italian Mountain Institute (EIM), we have always believed that the Italian mountain region as a whole deserves attention and respect through concrete actions and modern forms of monitoring. The mountain is a fragile environment with a constant instability and danger, as shown by the many increasingly evident symptoms of suffering of the “rocky giants" in recent years, even in the Dolomites: examples are the collapse of Torre Trephor, the minor tower of the group of the Cinque Torri (the Five Towers) in 2004 and detachment of some huge blocks of rock from Cima Una in Val Fiscalina in 2007.  Not to mention the Gran Sasso of Italy, which, after the landslide of Paretone of the Corno Grande (Big Horn) in 2006 (which produced no human casualties, like none of those in the Dolomites mentioned above had) recently started trembling and being heard; this time with terrible consequences. The EIM, engaged for years in surveys on the territory of the Gran Sasso of Italy, knows that it makes no sense to speak of stepmother nature, as opposed to mother nature, or the assassin mountain: it is simply a "restless" mountain, subject to continuous turns due to geological causes. The EIM is fully aware of the fact that the fate of Italy is closely linked to the future of its mountains.

The mountains are, in fact, one of the most characteristic features of our country: in addition to offering wonderful sceneries and landscapes of immense beauty, they are a valuable source of energy and irreplaceable resources and a unique heritage of culture and traditions. But the mountains also show the detrimental effects caused by depopulation and by indiscriminate exploitation of its resources and destruction of an area, moulded and preserved for thousands of years by man and now increasingly exposed to continuous catastrophes and hydrogeological instability. In this sense, the mountains are a symbol of the fragility of Italy, its troubled history, its problems and its difficulties, therefore, they should be recognised as the country’s top priority, like an evolving universe to be protected, to be enhanced and to grow according to a new model of development and wise government measures at a national, regional and local level to which the EIM - fulfilling its mission as a state research body at the service of the mountain institutions - is ready to make its cultural and technical-scientific contribution.

In this sense, the award given by UNESCO to the Dolomites can be a great opportunity to reverse the direction of policies in relation to our mountains, that should not be exploited, but loved and protected as this affects the Country’s future and the destiny of the future generations as well as our own.

http://www.eim.gov.it (The link you are accessing might not be in English.)