The Park along the River Noncello 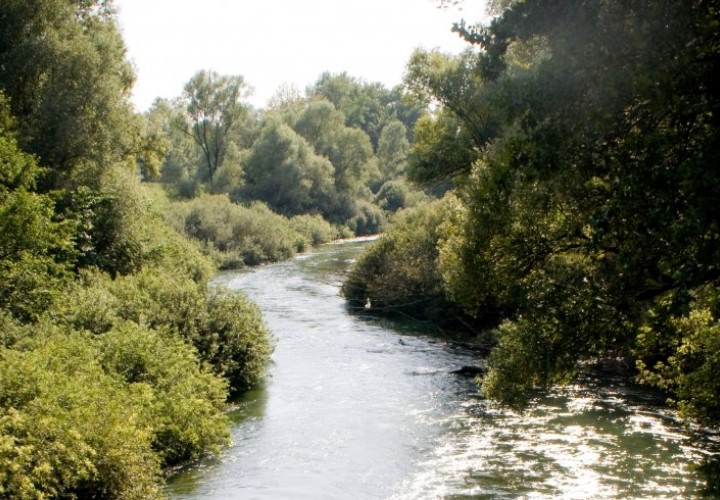 Located in the city centre, it can be easily visited as there are many foot trails.

Starting from the Adamo ed Eva bridge, in just a few steps you reach the Church of the SS. Trinità (the Holy Trinity), which was built on the left bank of the old river course. On the opposite side a lakeside promenade has been implemented...The river shore is downstream of the bridge. The area of Pordenone is also enriched by substantial public parks located in the various districts of the city. The Noncello is a typical spring water course with a constant flow and temperature throughout the year, except during the spring when, due to the regurgitation of the waters of the Meduna river the level also increases by several meters.

The Adamo ed Eva bridge that replaced the eighteenth century one by Bartolomeo Feracina, a renowned constructor of the Venetian Period, crosses the river.  The bridge takes its name from the statues located on tall stone pillars, that are actually of Jupiter and Juno and were given as a gift to the city of Pordenone by the Venetian lieutenant of Udine. Built in 1920 as a drawbridge to allow boats to navigate along the river to the new port assumed to be just a little further upstream but never completed. The current bridge is a good point to observe the elements of the park along the river Noncello, area that stretches through the modern residential part of Pordenone and which is part of the historical context because of its closeness and use of river transport in the past. When the river water is clear, it is also possible to see the fish fauna of Noncello from the bridge: numerous chub, the rarest trout and the valuable grayling that is exceptionally present in the water of the city centre. Crossing the bridge of Adamo ed Eve, we arrive at the rural church of the Holy Trinity (SS. Trinità), erected in the sixteenth century and designed by Ippolito Marone just outside the ancient Furlana gate that overlooked the river and the river port.

From the octagonal layout, the brick church boasts a circular hall with frescoes by Calderari showing stories from Genesis ** (1540-45), which includes Fleeing from Sodom with which Pordenone shows the clearly recognisable traits of the Renaissance. On the right bank of the river, upstream of the bridge, work has recently been carried out to the river road, which is in fact known as the Pordenone Riviera, with a wide bike path and sidewalk, from which you can look towards the river to observe the typical aquatic avifauna consisting of little grebes, mallards, coots, moorhens, herons and cormorants. The vegetation of the banks consists mainly of hygrophilous plants such as the different varieties of willow, poplar and alder. Other plants surround the banks of Noncello in the centre, creating a beautiful green oasis: the Guelder rose, the elder, hawthorn and acacia, which all bloom in late spring with their white flowers creating a striking natural-visual effect.

The city river is still used for navigation and recreation and the sea can be reached by sailing down the waterway that continues along the Meduna and Livenza rivers. Near the large parking lot of Marcolin a berth and slip dock with access for motor vehicles has been maintained for small boats. The port can also be accessed from the road running from Codafora, on the back of the city hall, alongside the canal with the same name, a tributary of the nearby river Noncello.

The larger boats can reach the rivershore in the area of Dogana di Vallenoncello, a fraction of Pordenone, located further downstream where there is an active shipyard equipped to shelter and repair vessels. Due to the reduced power of its flow, the whole river Noncello can be easily explored by canoe, both up and down the river, whereas motor boats require authorisation from the offices of the Friuli Venezia Giulia Region. For several years, speedboat events have been organised by Pordenone: the most important being the Venice-Pordenone-Venice rally, organised by the Portus Naonis team and the Gommonata; both taking place in September.  Canoe races also take place on the river Noncello, organised by the team of Cordenons, which for several years now has set up the regional downstream canoeing championships along the stretch of the river from Marcolin parking lot to the Costums in Vallenoncello.