Among small hamlets and rural landscapes 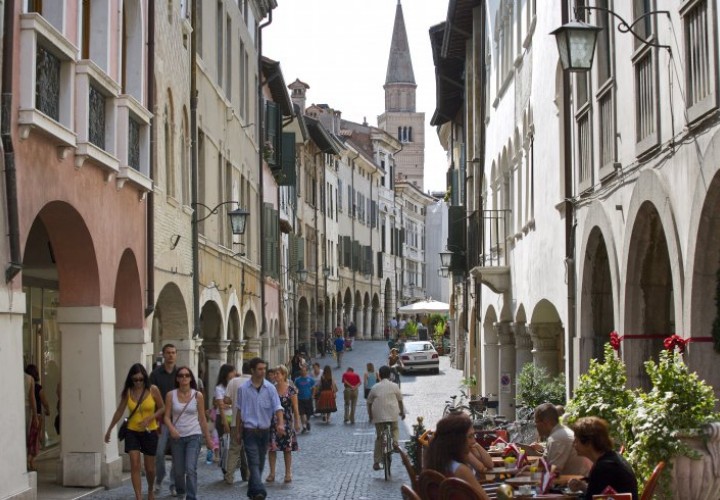 Discovering an unusual route between Pordenone and Casarsa della Delizia, through the enchanting hamlets and districts illuminated by clear winter days. At first, the route proposed would seem worthy of a treasure hunt. In fact, the small secondary roads of this itinerary have been purposely chosen to convey the tranquillity of the area and with an interesting half-way point, which is the Abbey of Sesto al Reghena. At this time of year with days that are characterised by a clear sky, this route becomes more fascinating.

The route starts from the railway station of PORDENONE (0.00 km). With the station behind, cross the pedestrian crossing (if necessary dismount and push the bike) and take via Mazzini, a tree-lined street in front to reach piazzetta Cavour, where two main roads of the city branch off. Once past corso Vittorio Emanuele, an ancient hamlet of the city, turn right towards Piazzale 20 Settembre. Cross it and in front of the new Teatro Verdi take the two-way cycle track along viale F. Martelli to reach the traversal cycle track of via Rivierasca, at the first roundabout. At the end of the road, turn right onto the cycle-pedestrian path running alongside the Noncello River, admiring the natural beauty of the park to the left and the characteristic belltower of the Duomo di S. Marco to the right. At the end of the track, keep to the left and go over the cycle-pedestrian bridge Adamo ed Eva that reaches the Chiesa della Santissima.

Cross the front of the church, turn right onto the path, past the PN-UD railway underpass, at the end of which turn left into the tree-lined cycle track at the side of the railway up to the small bridge (2.10 km up to this point). Cross the bridge to the right and pass in front of the primary and middle schools of Gaspare Gozzi. Continue to the left into via A. Vesalio and again to the left into via E. Bassini (all streets without traffic). At the end of the road turn right into via L. Spallanzani up to the STOP sign. Cross the road, turn right into via Nuova di Corva leading up to the parallel cycle track to the left. Follow it right up to the end (4.90 km). At the end of the cycle track, continue for a little more than 2 km on the main road SS 251 “taking care as the road is narrow and busy” and then leave it after crossing the bridge over the Meduna River by turning right and following the sign Fiume Veneto in via Passo (6.10 km).

Shortly afterwards, ignoring a road to the right, ride alongside the bank of the river for a short distance and before a flyover, turn right into via Vallon. Before the highway, turn right (8.10 km ) and continue again along via Vallon until reaching the STOP sign. Turn right following the sign for Azzano Decimo (9.0 km) and take the left turning into via G.Pascoli to reach the centre of Cimpello. Turn right into viale G. Carducci and at the junction indicating Fratte (10.50 km) continue along via Fratte until reaching the underpass of the highway, then turn into via Crozzoli. After about 2 km, Via Crozzoli becomes via Fratte in Praturlone. Continue along this road until reaching the STOP sign in Praturlone. At the STOP sign turn right and, after 300 m, turn left into via Bando.

Having crossed the Sile River, turn left at the crossroads into via Rivatte (14.80) and then at the first intersection to the right still continuing along via Rivatte past via Cesena Villafraca. After about 200 metres keep to the left in via dei Laghi along a dirt road, which at a certain point flanks the highway and then returns with a tight bend to the left onto via Tolmezzo. At the end, turn right into via Villutta and at the junction turn left, always following via Villutta. When reaching a big villa, turn right into via Sesto until reaching a large crossroads with via Treviso (21.10). Cross the road following the signs for the Abbazia (Abbey). After having intersected the old railway line of San Vito – Motta di Livenza on via Bernava, go straight along via Castello at the next intersection with via Stazione in località Marignana. After about 300 m on a bend, leave the main road and turn into a small road to the right that follows the canal and which, after crossing the small bridge, becomes a dirt track.

At the STOP sign, turn right into via G. Verdi and shortly after turn to the left into via Giotto, which leads to the centre of Sesto al Reghena and immediately after, to the entrance of the Abbey that is certainly worth a visit (25.80 km). Reset the cyclometer and take via Roma, past the gate, turning into via Zanardini. Continue up to the roundabout, keeping to the right, and take via Levada. This road is partly a dirt cycle track up to the junction with via Piave (27.40 km). Keep to the right and after about 200 m, take the dirt track to the right following the signs for Mulini di Stalis until reaching a clearing where the mills are located. It is worth stopping to see how the waters of the Lemene River were wisely used to make the grinding stones turn and make bread flour. Afterwards, along the same road, take via Venchiaredo and continue on the main road, past the railway, turning left until reaching the impressive mills of Cordovado.

Turn right and after a few hundreds of metres there is the town hall of Cordovado (32.10 km) whose centre (which is to the right) deserves a “detour” (out of the mileage). The route resumes from the town hall. After 300 m along the main road SS 463 towards S. Vito al Tagliamento, turn left into via Casette up to the STOP sign (34.10 km). Turn left into via Montesanto and after 250 metres, turn right into via Magredi, then at the bend turn left into via S. Rocco up to the STOP sign in località Vissignano. From here go to the right along the road with the same name, continuing northwards, passing Savorgnano along via Bagnarola, then via Santa Petronilla, “crossing the old Motta-San Vito railway line that at one time ran along an overpass, which has now been demolished”. Continue along via Tavielis up to the STOP sign with via Treviso (39.80 km).

Turn right into via Treviso and enter the town of San Vito al Tagliamento. At the STOP sign with via Pordenone turn left and then immediate right into via Prodolone and continue up to the junction, keeping to the left on via Villa to reach S. Giovanni di Casarsa, at the intersection with via Versutta (44.15 km). Turn right and “be careful” to turn left after 50 metres into a narrow road behind the Duomo. Continue along the cycle track between the houses until reaching via Mantegna again along a cycle track, to the left of via M. Buonarroti up to a supermarket. Follow the cycle track to reach the underpass of the railway station of Casarsa and once at the end of the underpass, turn right towards Piazza 4 Novembre in front of the railway station. (46.00 km).

End of the itinerary.